The only differences between an Octree and a Quadtree is an additional axis.  This post will cover bounding box checks; for Tree psuedo code and structure breakdown go to my Quadtree page.  Please note an interactive example is below for this tree structure.  For spheres and cubes (circles/rectangles in 2d) it’s always quicker to check intersections by comparing centers and length or radius.  For simplicity I only store a bounding boxes length and center.

To test if a point is inside a bounding box. Take the absolute value of the distance between the point and this boxes center, if this value is less than 1/2 it’s length (I times the distance by two because I don’t store half lengths).  If it’s true for every axis this point is inside.

To test if bounding boxes overlap.  Take the ABS of the distance between the two boxes (times by two or compare to their half lengths) and check if that value is less than the boxes combined length.  If it is, they overlap. 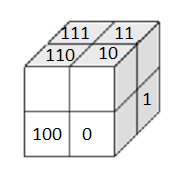 To find the child node a point falls into can be solved with three axis checks.  Example of how I arranged the nodes to the left (the cube that isn’t visible is 101.)

(Please note interactive example below takes about 30 seconds to load):

This is the first of a three posts covering trees and using them to partition space.  Each post will contain an interactive demo (bottom of the page.)  This post will cover Quadtrees, followed by Octrees and k-d trees.

A Quadtree is a useful tool when one needs to store and search for points in 2d space. In a quadtree a node is either a leaf or parent with four children.

Node composition:
The example to the right shows a Quadtree with a root node, one parent node and 7 children.  When using them to divide space we can see the root node in red has four children.  The spaces they represent are show with the bisecting blue lines.  Three of these four children are leafs, with only one of these leafs containing a data point.  The child representing the SE region is not a leaf node, it is a parent and has four leafs.  Two of it’s child leaf areas are shown by the blue and yellow lines.  Of these leafs, three have data points.  In a quadtree a node can have only two forms; a parent with four leafs or a leaf with no children.  A leaf does not always contain a data point, it can represent an area with no data.

A node must contain the following:
It’s four children (if they exist) North West, North East, South East, South West regions.
A field to store its data point (X,Y)
And a struct,class or fields to store its bounding box (the area it contains usually represented as X,Y coordinates)
Optionally you can include a reference to it’s parent

Here is the class from the interactive example.

Point insertion:
Inserting a point is done recursively.  First check if the point falls within the root nodes boundary box.  The steps following are duplicated until it is placed, starting at the Root node.

Does this node have children;

This search uses the following three objects
AlreadySearched – Hash set of already searched nodes
FoundLeafNodes – Queue to hold the nodes to check distance on [optional]
SearchBoundingBox  – The BB area we need to search
SearchPoint – the X,Y coordinates we are trying to find the closest data point to
ClosestNode – the closest node found

When using the interactive example below to search for a node, that the green box represents the SearchBoundingBox  used to test for the closest node. You can see how this is needed as diving down to the node which contains our SearchPoint will not always return the closest result.